Starting with only a traditional and imported South African Spice called SAFARI seasoning and a CHILLI flavour, the demand for varieties of these meaty savoury snacks grew! Customers demanded Garlic, Pepper, a sweet flavour, an Asian flavour, traditional BBQ, a flavour not too spicy and one even hotter! Jim rose and met every request and in doing so learnt the art of creating flavour profiles that took the jerky market by storm! By 2009, Jim had learnt a lot about spicing dried meat and decided to take his business to the local spice providers and mix his own. It took weeks of blind tasting by dedicated staff but in the end - it was official - Jim had created his own secret base jerky spice blend. Only the best spices are used and with the help of local spice suppliers - Jim is continuing to offer new flavours year after year. You'll notice a core range of 7 flavours that have passed the test of time - but watch out for that LIMITED EDITION flavour as Jim keeps it fresh and gives jerkaholics something new every couple of months! 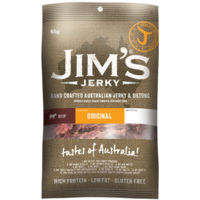 This flavour is far from plain - a mix of beefy-ness and coriander with small hints of garlic and pepper and is sweet and salty all in one hit! We're sure part of the secret to the amazing infuzed smokey flavour is the fact that this smokey taste comes from natural wood smoke used during the drying process, not artificial additives. Delicious! 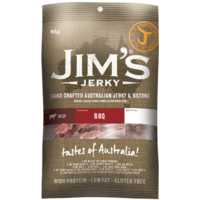 This savoury flavouring is a mix of beefy-ness, worcestershire sauce and smokey flavours of classic bbq grilling! This flavour doesn't disappoint, giving the typical taste profile of sweet honey mixed with soy to bring out savory characteristics too! So everyone only rates me around 7 out of 10 stars for my burn, but no doubt about it, I am a heated chilli flavour. We have launched our NEW LIMITED EDITION jerky flavour! What screams Aussie better than a fresh and juicy MANGO?